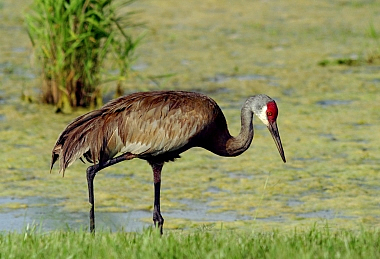 Just after reading a very interesting article in the latest issue of Archaeology Ireland (Spring 2011). The article discusses how the crane, a large and colourful bird which is related to the heron, was once very common in Ireland, only becoming extinct c. 300 years ago. The authors, Lorcan O’ Toole and Ronan O’ Flaherty, suggest that this impressive bird may have had a special place in the Irish psyche. During the early medieval period it was often associated with kings and saints, while eating its flesh was a social taboo. References also exist to its association  with druids who apparently took on the stance of a crane when casting spells or curses. The bird frequently appears in Irish mythology and its association with the mystical is also often seen in other cultures worldwide throughout the ages. A feature of the various cults surrounding the bird is the prevalence of ‘Crane dances’ in their paraphernalia.

This brought the two authors to a series of rock art depictions from Mont Bego, Italy which show a number of people holding halberds in what appears to be a ritualised fight or dance. Could this be a representation of a ‘Crane dance’ ?  When hafted like in the Mont Bego depictions the halberd looks remarkably like the beak, head and neck of a crane. The halberd was always a puzzling object as it would have been a very weak and ineffective weapon. This new theory that it, instead, may have been related to a ritualised dance is compelling.

6 thoughts on “Halberds and Crane dances, a new theory.”