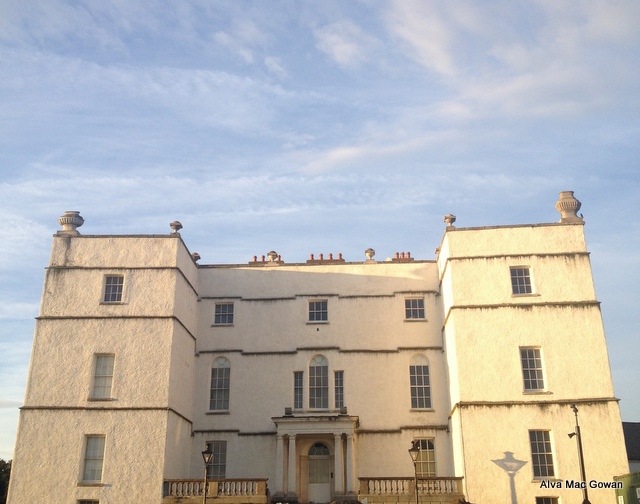 On Friday the 19th of September I received an email from an old friend and fellow archaeologist, Antoine Giacometti of Archaeology Plan, which simply read, ‘Call me, I have work for you’. A smile spread across my face as I had just spent the last six weeks in the bog, excavating countless ancient trackways in the midlands at great speed. I was exhausted and even though the trackways were incredible, I missed finding artefacts which are a rarity on wetland sites. So I called Antoine and was greeted with much excitement. A few months previously he had been hired by the OPW to monitor renovations at Rathfarnham Castle and had just come upon, ‘a cache of luxury artefacts’ in the base of one of the towers.

Monday morning I met Antoine and his associate, Steve McGlade in front of the castle. The pair brought me to the south-west tower, one of four that hug each corner of the Elizabethan fortified house, built by Adam Loftus, Archbishop of Dublin, in 1583. After some investigation this tower appeared to be the most disturbed and so it was selected to house a lift shaft. After removal of the ground floor level, two earlier floor levels were revealed, the lowest one possibly dating to around 1700. When its floor slabs were lifted a deep deposit of organic material was uncovered. As the conditions were in effect air tight and damp the level of preservation was almost like that of a bog. So, the three of us rolled up our sleeves and got stuck in. The volume of artefacts was unbelievable.

There were so many finds we were rapidly running out of containers to house them. Within the first twenty minutes, we’d filled our first bucket with sherds of colourful 17th century imported pottery, clay pipes, shards of fine crystal goblets, leather shoes, porcelain sherds, many gold coloured pins, textiles, cutlery, the list goes on…

I was promoted to Finds Supervisor, while Steve continued to find more and more incredible artefacts. He discovered a dozen complete glass wine bottles dating to the second half of the 17th century; these are extremely fine examples of some of the earliest known glass wine bottles in Ireland. They tied in nicely with the stunning selection of crystal cup and goblet shards that were being uncovered; these are hugely significant because, as evidence suggests, they may have been manufactured in Dublin.

Steve also uncovered a practically complete blue and white Chinese porcelain plate. Upon cleaning it, I found that it had markings on the back that revealed it was from the era of the Kang Xi (Qing dynasty), an emperor who reigned during the late 17th century – a time-frame that corresponds with the wine bottles, coins, clay pipes and leather shoes uncovered. In a sense, we had been holding our breath about the date of the material, examples of elite 17th century artefacts are relatively rare in Ireland, partly due to the instability of the period

Some of the wine bottles were stamped with seals bearing the initials ‘A L’ and the date ‘1688’. This may refer to another Adam Loftus, who was the Baron of Rathfarnham and 1st Viscount of Lisburne.  A Roman Catholic, who fought on the side of the Royalists, he was killed at the siege of Limerick in 1691.

One afternoon I mentioned to Steve that I’d like us to find a coin. Soon after, he presented me with a 1682 Charles II 17 String Irish Halfpenny. After that, nearly anytime I asked for something it seemed to appear. It became slightly ridiculous as we would rack our brains to think of what kind of delights we hadn’t found yet.

Shortly afterwards Steve had to reluctantly leave to investigate a possible medieval settlement nearby in Stepaside and established archaeologist, Alan Hayden gladly accepted the chance to excavate this amazing site. He was full of fascinating information about the castle as he had previously worked as a guide there. Myself and Antoine soaked up all the useful research like a dry sponge in a wet puddle

One day, what can only be described as a black lump of material was excavated; it was heavy, and covered with broken pottery and rusty nails which had all stuck together, there appeared to be some sort of rusted metal at the bottom. I immediately joked that it might be an armour breastplate because I’d only just asked for evidence that Cromwell or his men had stayed at the castle. The heavy lump was jokingly called ‘Alva’s armour’ and was lifted out for further investigation. To our amazement, three weeks later, after the object was carefully cleaned, we found ourselves starring at a 17th century breastplate.

An advantage to dating artefacts from this period is that fashions were fickle and this makes it easier to narrow down stylistic changes in shoe shapes, ceramics, even musket ball sizes. What also helped us is that the Loftus family were one of the main trend setters in late 16th and 17th century Ireland; they attended court in London and undoubtedly returned home with all the latest fashions on display to impress their contemporaries.

We received many visitors at the castle from the National Monuments Service, the OPW and the National Museum, all of whom were wide-eyed when we showed them the highlights of what had been found.  The question that was beginning to cross our minds was, ‘What will happen to the collection’; it would have been a shame for it to disappear into storage and never again see the light of day. During our lunch breaks, in the warm October sun, we began to discuss the option of an exhibition in the castle, in the basement perhaps which is vaulted and contains many of the original Elizabethan architectural details, like gun loops, doorways, fireplaces and even a hidden room. And so, we suggested the idea to the OPW who quickly agreed how special it would be. Together, we approached the museum with the proposal of creating a space in the castle worthy of such a spectacular exhibition.

Five weeks later, after a ministerial visit, a spot on the RTE news and an Irish Times interview, we’ve achieved our goal. The future of this remarkable collection of belongings, which we can associate with the real life characters that once lived at Rathfarnham Castle, has been secured. After the long task of conserving and researching this significant assemblage of material is completed, the OPW are going to work under the guidance of the National Museum of Ireland to produce a fascinating exhibition which will reveal the private life of an elite household in 17th century Ireland. What will make it particularly special  is that it will be housed within the same walls where the collection had been left by the Loftus family over 300 years before.

11 thoughts on “Lost and Found: Excavations at Rathfarnham Castle, Dublin”