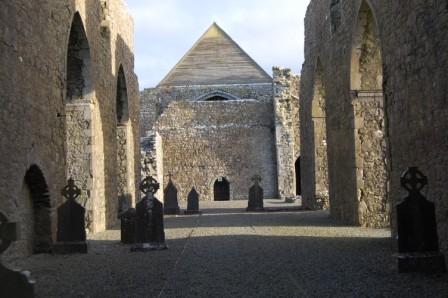 I recently visited Abbeyknockmoy Abbey in Co. Galway, which must be one of the most impressive Cistercian monasteries in Ireland. The extensive remains comprise a large transitional style church of early 13th century date, a now largely ruined central tower and the remains of a cloister. The east wing of the cloister is the most extant and it contains the sacristy, chapter house and a later garderobe. The abbey was founded in AD 1189/90 by Cathal Crovdearg O’Connor, king of Connacht, apparently in fulfilment of a vow he made prior to his victory over an English army led by Almeric de St. Lawrence.

In his later years Cathal Crovdearg retired to Abbeyknockmoy to become a monk and this was where he was buried on his death in 1224. The abbey thereafter became a mausoleum for several generations of the O’Connor family. There is a finely sculptured stone head in the abbey church, which Professor Roger Stalley has suggested may actually represent Cathal Crovdearg, the abbey’s founder (see Doran & Lyttleton, 2008, 54-55). Although the chin and nose of the head were damaged in antiquity the carefully defined eyes, an elaborate crown and long curly hair still survive.

Despite its impressive ruins Abbeyknockmoy doesn’t appear to have been a rich house. In the taxation of 1302-06 the income of the abbey was valued at £42 and in 1411 the abbot complained to the pope that his house was so poor that he could not maintain his community properly and one of his monks was granted licence to serve a parish church. By the end of the sixteenth century the house was fairing little better: the inquisition of 1584 put the income of the house at just £78  (information from here). 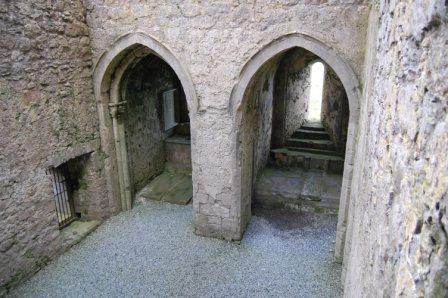 The abbey suffered a similar fate to the rest of the monasteries in Britain and Ireland when it was dissolved on the orders of Henry VIII in 1542. However, the abbot Hugh O’Kelly successfully defended his possessions by acknowledging the supremacy of the king and renouncing the pope! In return he was granted the abbey and its lands for life with the stipulation that he furnish 60 horse-men, a battle of Gallowglasses (Scottish mercenaries) and 60 foot-soldiers for the king’s service in Connact. For some time afterwards a form of secularised monasticism appears to have been practised at the abbey. This had ended by 1652 when the Blake family were granted the monastery and its lands and they remained in possession of the property up until relatively recently.

The abbey ruins contain some fine stonework, especially in the chancel of the church (this is where the altar stood and is unfortunately closed to the public). The chancel also contains one of the last surviving medieval frescos in Ireland. Frescos are highly coloured pictures that were painted on the wall while the plaster was still wet so the colours became one with the plasterwork. The lower panel of the main fresco at Abbeyknockmoy shows Christ with his hand raised and the martyrdom of Saint Sebastian (St. Sebastian was often invoked against plague). Above these are three dead kings and three living kings. Under the kings is an inscription which reads ‘We have been as you are, you will be as we are’.

The chancel also contains a tomb commemorating Maelsechnaill O Ceallaigh (O’Kelly), king of Ui Mhaine, and his wife Fionnghuala, daughter of Toirdealbhach O Conchobair (O’Connor), king of Connacht, who died in 1401 and 1403 respectively. This tomb contains one of the very few late medieval stone inscriptions written in the Irish language.

The fields around the abbey contain extensive earthworks, which appear to represent demolished buildings, garden areas and property boundaries. Their survival in an era of modern argricultural practices  is remarkable and they suggest that the monastery was once surrounded by an extensive area of habitation.

14 thoughts on “The Cistercian monastery at Abbeyknockmoy, Co. Galway”