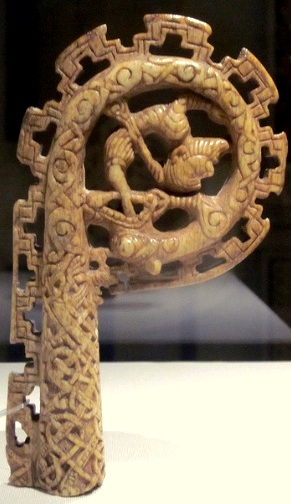 This photo shows the Aghadoe Crozier, a beautiful 12th century artefact found at Aghadoe, County Kerry in 1848. The crozier is intricately carved out of walrus ivory and is decorated in the Viking Urnes style. It also contains some features which are paralleled on the portals of the Early Medieval church at Aghadoe. The crook appears to have been shortened in antiquity but apart from this it is in remarkably good condition.

The stem of the crozier bears zoomorphic ornament which eventually turns into a foliage pattern[i]. The crook then curves and becomes the forepart of a monster/dragon that has a man either entering or leaving its wide open jaws. This may be a depiction of the biblical story of Jonah and the sea-monster. The crozier can currently be viewed at the National Museum of Ireland, Kildare Street, Dublin.

7 thoughts on “The Aghadoe Crozier”