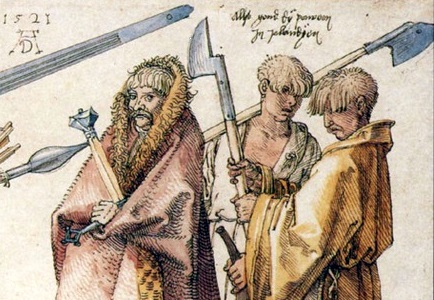 I recently spotted what appeared to be remarkably modern looking haircuts in Albrecht Druer’s woodcut of 1521 AD[i]. This image shows a group of Irish soldiers[ii], most likely mercenaries, who were fighting on the European continent during the early 1520s. I soon discovered that, far from being unusual, this distinctive hairstyle was actually very popular amongst the native Irish during the 16th century.

Referred to as a ‘glib’ this style involved the hair at the back and side of the head being trimmed short,  while at the front and top it was allowed to grow long, resulting in a large fringe, which fell down over the face.

In 1517 Laurent Vital described this distinctive Irish hair style thus: ‘for they (Irish men) were shorn and shaved one palm above the ears, so that only the tops of their heads were covered with hair. But on the forehead they leave about a palm of hair to grow down to their eyebrows like a tuft of hair which one leaves hanging on horses between the two eyes’[iii].

Seen as a particularly Irish haircut it was despised by the  English establishment and attempts were made to outlaw it in 1537[iv] and again in the 1570s[v]. However, it remained persistently popular and appears to have been worn as badge of honour amongst Irish kerns (soldiers).

In c. 1596 the famous English poet, Edmund Spenser, deplored this ‘thick curled bush of hair, hanging down over their (the Irish) eyes’ and compared it to a thief’s mask[vi]. He also rather fancifully stated that the Irish believed that this heavy fringe of hair could deflect the strike of a sword, ‘going to battle without armour on their bodies or heads, but trusting to the thickness of their Glybbes, the which (they say) will sometimes bear off a good stroke’[vii]. This last assertion, however, has probably more to do with Spenser’s own anti-Irish prejudices, rather than any genuine belief held by the Gaelic Irish.

[i] The entire image shows two groups of men, the first are heavily armed and appear to be gallowglasses, the second (discussed here) are more lightly armed and probably represent kerns

[vi] Edmund Spenser ‘A View of the present State of Ireland’. Corpus of Electronic Texts, accessed 8/8/2013