I recently described how the forces of Brian Bóruma, king of Munster, attacked and destroyed a sacred grove of trees  belonging to the Vikings of Dublin. This wood appears to have been associated with Thor, the Viking god of thunder, and its destruction by Brian Bóruma was probably an act imbued with both religious and political symbolism. 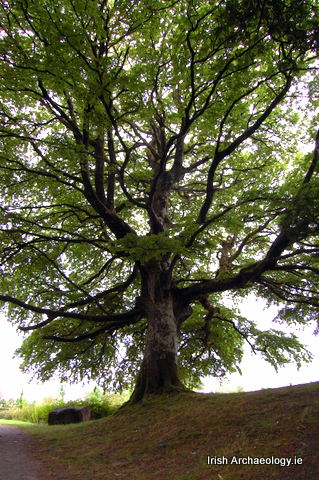 However, as the Irish Annals clearly show, the belief in sacred trees were not just confined to the Vikings of Dublin, but was also found in contemporary Gaelic society. Typically referred to as bile in the early texts these ‘sacred’ trees were often associated with Irish royal inauguration sites.  They appear to have played an important part in Irish kingship ceremonies and as a result were sometimes targeted by rival dynasties.

Indeed, Brian Bóruma himself was to suffer this ignominy in 981 AD when the forces of Máel Sechnaill mac Domnaill, king of Meath, swept into Munster. The Meath men journeyed straight to Maigh Adhair in modern Co. Clare, which was the inauguration site of Brian’s clan the Dál Cais. Here they deliberately targeted the sacred bile,  cutting it down and digging up its roots[i]. Destroying this tree was undoubtedly a highly symbolic act and a direct affront to Brian’s kingship.

However, it appears that the men of Meath were not wholly successfully in their endeavours. Not alone did Brian’s kingship endure and prosper but the great tree at Maigh Adhair also survived[ii]. 70 years later it was still standing, but its days were now numbered.  In 1051 Aedh O’Connor, King of Connacht, attacked Magh Adhair and once more the sacred bile was the focus of the assault.  This time the attack appears have been more successful as the tree is described as being left ‘prostrate’ on the ground[iii].

The annals also record other attacks on sacred trees. For example, in  1129 AD the sacred bile of the Ui Fiachra Aidhne kings of south Galway, the Ruadbeithech (red birch tree), was cut down. Similarly, in 1099 an army led by Domhnall Ua Lochlainn of the northern Uí Néill defeated the men of Ulster and afterwards cut down their sacred tree, which was known as ‘Craebh-Tulcha’[iv]. It was twelve years before the Ulster men could exact their revenge. In 1111 AD they sent a force deep into Uí Néill  territory and attacked Tulach Óc, the inauguration site of the Uí Néill kings, where they cut down the sites sacred grove of trees[v]. They were to pay dearly for this insult, however, as in retaliation the Uí Néill raided Ulster, stealing over 3,000 cows in retribution.

As these incidents illustrate, sacred trees appear to have been powerful symbols of royal authority and as a result were often targeted for attack. Their exact role in kingship ceremonies remains uncertain but it may have been something to do with the slat na righe (rod of kingship). This was the principal ritual prop and archetypal symbol of legitimate royal authority[vi] and it may have been cut from the branches of the bile during inauguration ceremonies. This is suggested by the 12th century Life of Saint Máedóc, which records how the king of Breifne was anointed with a rod that had been cut from the sacred hazel tree of Saint Máedóc[vii].  Although this latter account is an overtly Christian one, it seems likely that the use of sacred trees/bile in kingship ceremonies had its origins in older, pagan beliefs.

[ii] or possibly was replaced with a new tree