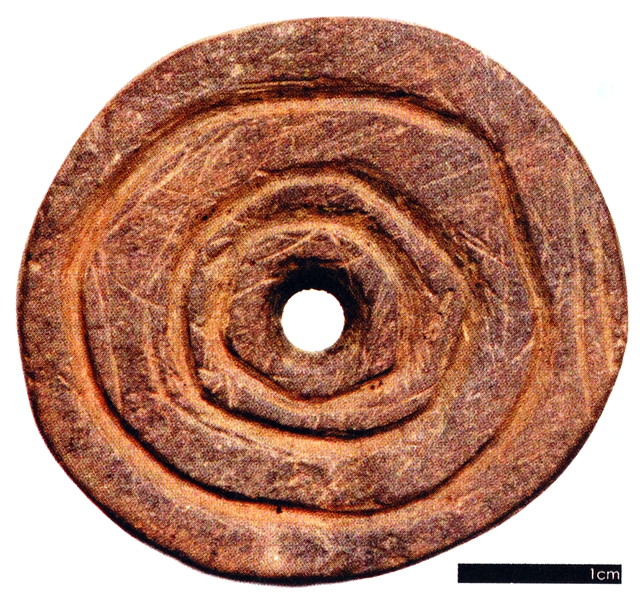 This decorated spindle whorl was discovered inside a Late Bronze Age house that was excavated by Bernice Molly at Killmelly, Co. Tipperary (Molloy 2009, 67). Used to make thread, spindle whorls played an important role in textile production. They consist of a perforated disc or spherical object that was originally attached to a spindle stick. When the spindle was spun and then dropped with a wisp of wool attached the momentum of the spinning action was maintained by the whorl (Hurley 1997, p. 674). This allowed people to efficiently twist fibres such as wool and flax into yarn (see image below).

The Killmelly spindle whorl is fashioned out of locally sourced mud-stone and measures between 35 and 38 mm in diameter (O’Brien 2009, 347). Circular in plan and disc shaped in profile, the surface of the whorl is decorated with three inscribed concentric circles. Although crudely executed, this ornamentation probably created a pleasing effect when the spindle was spun. The central hole, through which the spindle stick would have passed, is hour-glass in profile, indicating that it was bored from both sides.

Bronze Age spindle whorls are relatively rare in Ireland and only a small number have been recorded. These include examples from Ballyveelish and Lahssessargh in Co. Tipperary, Coarhamore in Co. Kerry and Ballinderry in Co. Offaly (ibid, 348).

1 thought on “A Bronze Age Spindle Whorl from Tipperary”