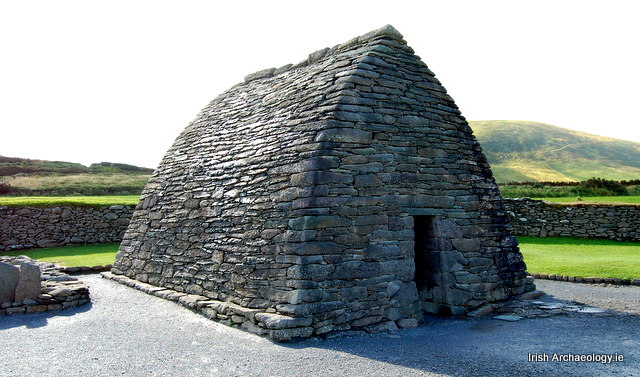 The iconic Gallarus oratory is located in the heart of the Kerry Gaeltacht, on the very western tip of the Dingle peninsula. With its distinctive appearance, often referred to as resembling an upturned boat, the church is now a well-known tourist attraction. Constructed entirely out of locally sourced stone, the church is corbel vaulted. This entailed gradually overlapping the stones, so that each course projected slightly inwards until the arch was closed at the apex of the roof. An ancient technique, this means of roof construction was employed at the great Neolithic tomb at Newgrange.

The exact date of the church at Gallarus is unknown, although Peter Harbison has suggested that it may date from the 11th/12th centuries AD, based on a number of architectural features (Harbison 1970). A small structure, the interior of the church measures just 4.8 m long by by 3 m wide. It is lit my a single, diminutive window, located in the eastern gable wall. A local tradition states that anyone who climbs through this tiny window is guaranteed access to heaven. I remember clearly as a small child being passed through this opening, a practise which is now frowned upon by the OPW. The entrance into the church is defined by a simple linteled doorway located in the western wall. This was originally sealed by a wooden door that was secured in place by two stone brackets (see image below).

Outside the church, on its northern side, is a low rectangular stone setting, which may mark the location of a léacht or grave. It contains a simple cross slab at its head that bears an inscription in half unical script, ‘Colum Mac Dinet‘ (Colm son of Dinet). An English traveller, Richard Pococke, who visited the oratory in 1758 recounts this interesting piece of local folklore concerning the stone setting, ‘Near this building they show a grave with a head at the cross of it and call it the tomb of the Giant; the tradition is that Griffith More was buried there, & as they call’d [it] a chapel, so probably it was built by him or his family at their burial place‘ (Harbison 1970, p. 36).