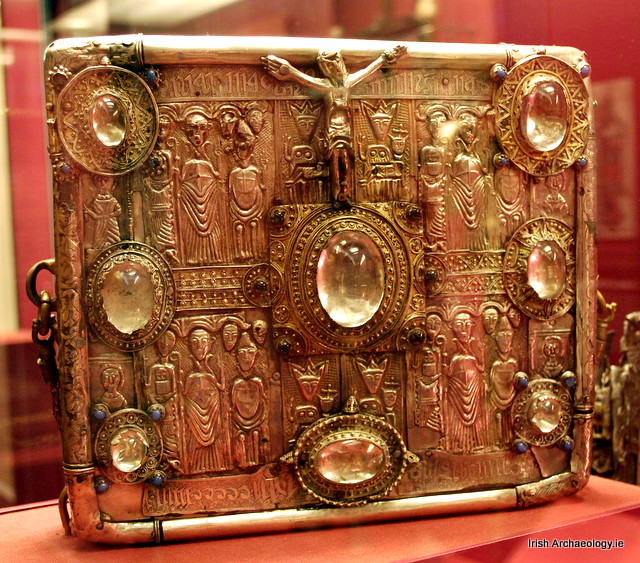 This ornate book shrine comes from Clonmany, Inishowen, Co. Donegal, where the O’Morrison family were its traditional keepers. Associated with Saint Cairneach, the oldest parts of the shrine appear to date from the 11th century AD.

The core of the artefact consists of a single piece of yew wood that was hollowed out to receive a relic, most likely a religious text. The wood was then adorned with a series of decorative panels. On the sides these consist of bronze plates of late 11th century date, that have been inlaid with silver and enamel.  The back of the shrine is embellished with another bronze panel that contains a striking pattern of crosses, highlighted with red enamel. The elaborate front was added by Brian O’ Morrison in 1534. It is decorated with silver foil and large rock crystal jewels. The crucified Christ is centrally placed, as are four panels containing images of the crowned Virgin and Child. A further four panels also adorn the front of the shrine and these depict three figures, who probably represent Saints Bridget, Patrick and Colm Cille. 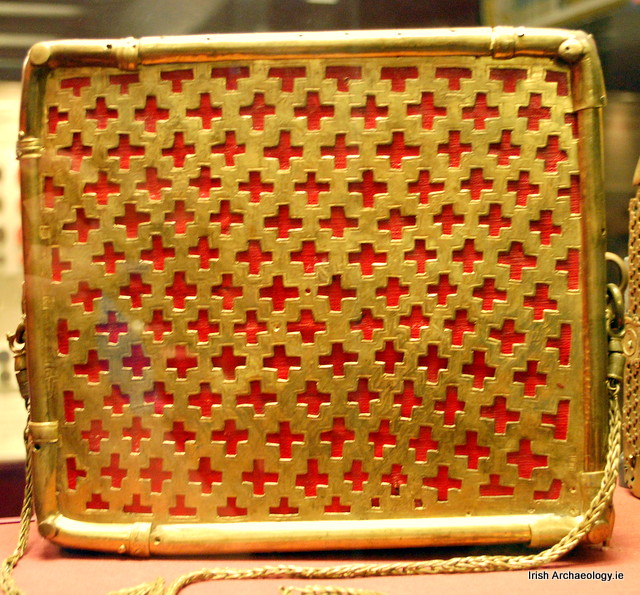 The first of the figures appears to be a female who wears a flowing robe and stands upon a serpent. She holds an ornate book in her left hand, while her right hand clasps a staff. The central figure is bearded and tonsured and is dressed in a vestment with a distinctive high collar. His left hand is raised in benediction and his right hand holds a crozier. The final figure, in contrast, is seated and wears a mitre upon his head. In his right hand he holds a staff surmounted by a cross, while his left hand is raised in benediction.

This beautiful shrine can now be viewed at the National Museum of Ireland, Kildare Street, Dublin.

1 thought on “Shrine of the Miosach: An Early Irish Book Shrine”