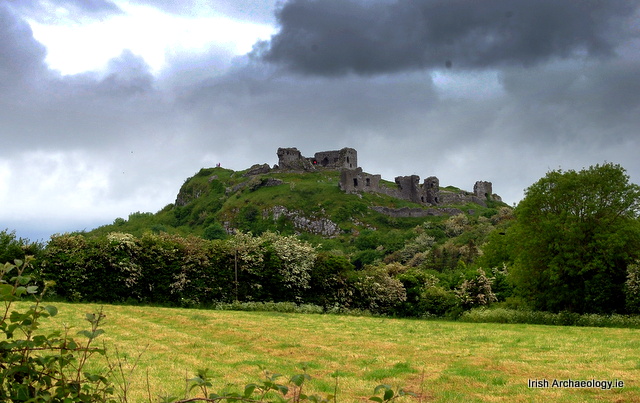 From the top of a large limestone outcrop in county Laois, the imposing fortress at the Rock of Dunamase dominates the surrounding landscape.  It is strategically located, overlooking an important route between counties Carlow and Laois, and as result the castle played an important role in the early Anglo-Norman expansion in Leinster. Today most of the surviving ruins at the site date from the late 12th and early 13th centuries AD, but evidence for earlier activity also exists.

The Irish name for the castle (Dún Másc) translates as Masc’s fort and the rock appears to have been defended since at least the 9th century AD.  Some evidence for this earlier fort was identified during archaeological excavations carried out in the 1990s (Hodkinson 1995 & link). These revealed at least two enclosing drystone walls and an earthen bank which pre-dated the Anglo-Norman castle. In addition,  two copper-alloy decorative pieces of 9th century date were uncovered along with a silver Anglo-Saxon penny (Ecgberht of Wessex, 802-839 AD). This ties in with the historical record, as the first reference to Dunamase occurs in 843 AD when it was attacked by the Vikings (Annals of Four Masters).

It is not exactly certain who built the subsequent Anglo-Norman castle, but it may have been Meilyr FitzHenry, or possibly William Marshall, Lord of Leinster. Construction began sometime in the late 12th century and an impressive fortification was soon erected that cleverly utilised the rocks natural defensive features. It contained at least four lines of defence, including an outer and inner barbican, a curtain wall and a substantial inner keep.

The inner barbican was defended by a  deep ditch and stone wall and was entered via an imposing gateway. The gateway contained a murder hole, through which stones and boiling oil could be thrown down on attackers, as well as a draw bridge. The next line of defence was provided by a large curtain wall, which enclosed the top of the rock.  Access through the wall was provide by an impressive gatehouse, that was at least two storeys high. As an obvious focus for attack, the gatehouse had extensive defensive  features,  including an iron portcullis, a drawbridge, a wooden gate and inward-facing arrow slits. Originally, the area inside the curtain wall would have contained wooden houses and structures, but none of these are now extant. What does survive is the massive rectangular stone hall/keep.  Twelfth century in date and located on the highest point of the rock, this structure was modified in the 18th century when an attempt was made to turn it into a banqueting lodge.

An archaeological excavation carried out by Brian Hodkinson in the 1990s revealed that the castle was effectively abandoned in the 14th century. This also ties in with historical accounts, which indicate that the fortress was was overrun by the Irish under the command of Leysart O’Moore in 1342 (The Annals of Ireland by Friar John Clyn).

Finds from the archaeological excavation included a fine collection of medieval pottery as well as a variety of iron artefacts such as medieval arrowheads, horse equipment, locks and keys. Evidence for more sinister activity was also identified in the form of decapitated human skulls. It appears that these had originally been impaled along the battlements, most likely as a warning to other rebels and outlaws (Hodkinson 1995, 21).

The Rock of Dunamase is now maintained by the Office of Public Works and is open to the public year round. Well worth a visit, there are magnificent views of the surrounding countryside from the top of the castle. 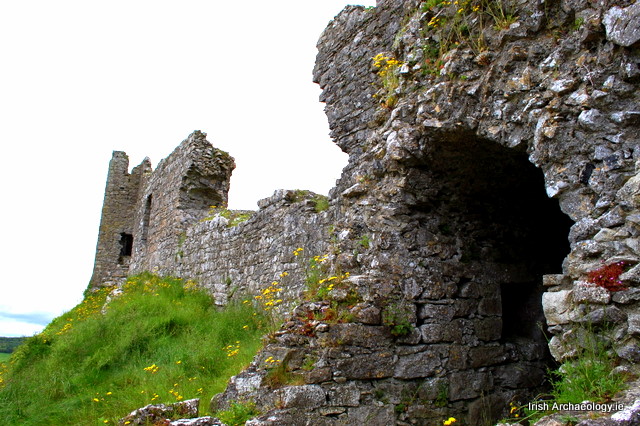 3 thoughts on “The Rock of Dunamase, Co. Laois”