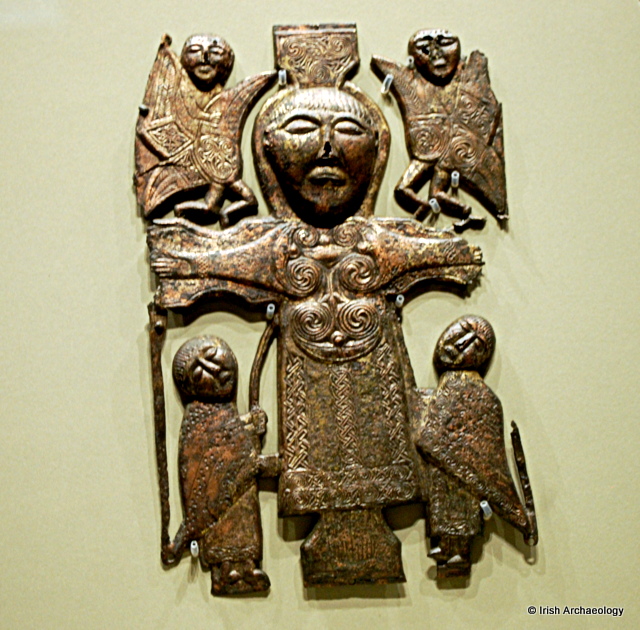 This gilt bronze plaque is one of the earliest surviving representations of the Crucifixion in Ireland (Wallace 2000, p. 39). Most likely 8th century in date, is was discovered at St. John’s, Rinnegan, Co. Roscommon sometime during the 19th century. It depicts a beardless Christ, who is flanked by the Roman soldiers Longinous and Stephaton, while a pair of angels hover around Jesus’ head. The artefact is covered in a variety of decorative motifs, with spirals and interlace patterns being utilised to great effect. It was made by hammering a bronze sheet from behind, to form the raised figures, while the ornamentation was added by engraving and chasing (Harbison 1984, p. 1).

The presence of at least four small rivet holes suggest that the plaque was originally attached to an object, possibly a book cover, a composite shrine or a wooden cross. A piece of exceptional craftsmanship, the plaque may have been manufactured at the great Early Christian monastery of Clonmacnoise, which is located just 15 miles to the south of Rinnegan.

The artefact can now be viewed at the National Museum of Ireland, Kildare Street, Dublin.

1 thought on “An 8th century Crucifixion Plaque from Co. Roscommon”