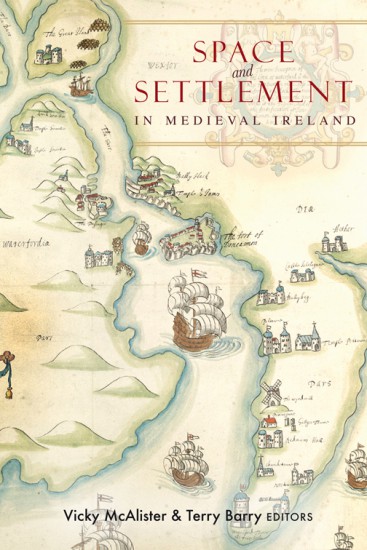 To celebrate the launch of ‘Space and Settlement in Medieval Ireland‘, a new publication by Four Courts Press, I have one copy of the book to give away (see below for entry details). The book launch will take place next week on Thursday 19 November in the Mansion House, Dawson Street, Dublin 2 and all are welcome to attend. Some more details can be found on Four Court’s website, while RSVP’s can be made to info@fourcourtspress.ie.

Based on the proceedings of an annual conference held at Trinity College, Dublin, ‘Space and Settlement in Medieval Ireland‘ contains a fascinating selection of papers which embrace the disciplines of history, geography and archaeology.

Fleets, forts and the geography of Toirdelbach Ua Conchobair’s bid for the high-kingship by Mary Valante

On the edge of the colony: Overk and the Carlow Corridor by Linda Shine

The tower houses of Co. Down: stylistic similarity, functional difference by Gillian Eadie

The death of the tower house? An examination of the decline of the Irish castle tradition by Vicky McAlister

The economic hinterland of Drogheda in the later Middle Ages by James A. Galloway

Competition:  The good folks at Four Courts Press have very kindly offered a copy of their new publication,’Space and Settlement in Medieval Ireland‘, as a prize in Irish Archaeology.ie’s latest competition. To enter just leave a comment below (all comments have to be moderated so it might take an hour or two for them to appear). I’ll then pick a winner out of a hat (closing date for entries is 6 pm on Friday 13th of November, the winner will be notified on Saturday the 14th of November).

119 thoughts on “Space and Settlement in Medieval Ireland”