Last week I visited a fascinating archaeological dig in the Dublin mountains, where Neil Jackman of Abarta Heritage is excavating the remains of suspected Neolithic tomb. The site is located on prominent hill overlooking the city, right beside one of Dublin’s most infamous buildings, the Hell Fire Club. Built in 1725, this large stone structure was once home to a notorious group of 18th century aristocrats who were described by Jonathan Swift as “a brace of Monsters, Blasphemers and Bacchanalians”.

They used this isolated building as base for wild parties, drunken escapades and possibly more malevolent activities. However, by the 19th century the house had fallen into ruin and was now reputedly home to something far more sinister, for according to Dublin folklore, the Hell Fire Club is haunted. Numerous ghostly tales are told about its dark and foreboding rooms and these suggest that the building is haunted by the devil and also by a black, demonic cat.

Thankfully, no sign of any spectres were spotted during the archaeological dig. Instead, the archaeologists have uncovered evidence of a denuded prehistoric cairn. It is thought that this mound may represent the remains of a passage tomb, similar, but smaller in size, to the famous examples found in the Boyne valley, such as Newgrange and Knowth.

Unfortunately, the tomb was badly damaged in the 18th century when the builders of the Hell Fire club used the mound as a source of stone. In Irish folklore destroying ancient monuments is deeply frowned upon as they were believed to be the home of the fairies or Sidhe. Bad luck is meant to follow anyone who commits such an act and it is tempting to link the destruction of the passage tomb with the subsequent belief that the Hell Fire club was haunted. 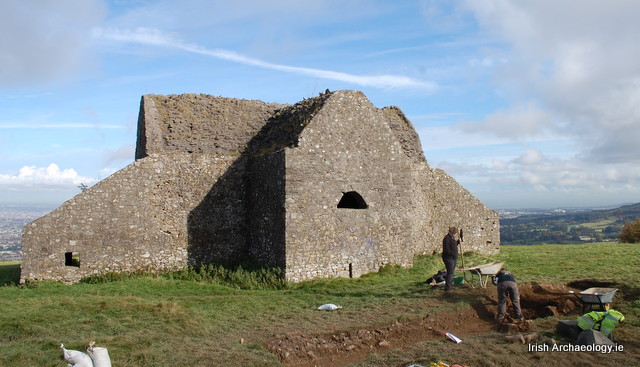 Undisturbed by ghosts, the archaeological excavation has slowly revealed what the damaged mound may have originally looked like. It now appears that it was built out of layers of earth and stone, which were surrounded by a kerb of large boulders. A hollow near the centre of the mound was most likely occupied by a chamber or passage and this is where the burial remains would have been placed. This area was largely untouched by the current phase of excavation at the Hell Fire Club.

Artefacts recovered from the mound deposits are suggestive of a Neolithic construction date and include pieces of worked flint and a wonderful polished stone axe fragment.

Over the course of the dig the site has been visited by numerous local schools, as well as a constant stream of visitors, all of whom were expertly guided thought the excavation process by Neil Jackman. Indeed, public engagement has been one of the cornerstones of the Hell Fire Project and this is something that should be greatly lauded.

The archaeological dig, which was funded by South Dublin County Council, finished today, just in time for Halloween. However, if you would like to keep abreast of the post-excavation phase, where the artefacts and samples will undergo specialist analysis, you should follow Abarta Heritage’s webpage.

6 thoughts on “Excavating a Prehistoric Tomb at the Hell Fire Club, Dublin”