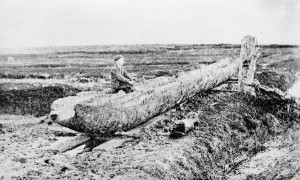 A history of Ireland in 100 objects

by Fintan O’Toole (taken from the Irish Times Link)

It is so long – 15m in all – that it cannot be photographed as a whole inside the National Museum of Ireland. The best image goes back to 1902, when it was taken in through the wide gates of Leinster House. It was discovered the previous year in a boggy area that had once been a small lake at Lurgan, Addergoole, Co Galway.

This huge boat tells us something not just about the people who made it but also about the landscape in which they lived. The oak that was hollowed out to create it was far bigger than any that could grow in Ireland today. The canoe is thus tangible evidence of climate change. It comes from an Ireland that had to be significantly warmer than it is now to enable such huge trees to grow. It is more than a metre wide, suggesting that the trunk of the oak was twice that diameter. As a vestige of a warmer, drier island, the Lurgan boat may point as much to our future as to our past.

It is tempting to imagine the canoe as the type of vessel that brought migrants to Ireland and carried trade between the island and its neighbours. But would this type of vessel ever have been stable enough for seafaring? The general assumption is that boats for long- distance travel were made from skins and wood, not unlike currachs, and that small dugout canoes were used on lakes and rivers.

The Lurgan canoe, though, is far too big to have been used for fishing or ordinary transport on the small lake where it was found. The task of hollowing out such an immense tree trunk with stone adzes would have been extremely laborious, even with the careful use of fire to burn away some of the wood – much more effort than would be justified by mundane uses. Eamonn Kelly of the National Museum believes, therefore, that its purpose was ceremonial display. “This isn’t something that your average farmer knocked up to do a spot of fishing. It’s probably to do with the ruling elite, or the ruling man if there was such a thing. It has a touch of the late-Neolithic Porsche about it. Among the Maori or the peoples of northwestern America dugout canoes of this scale had a purpose beyond mere functionality – showing off to the neighbours being the obvious one.”

There is, though, another possibility. Some archaeologists have argued that a series of paired holes in the canoe suggest that it was fitted with some kind of stabilisers or outriggers. If this were the case it could have been used for more extensive travel. Either way, the canoe reminds us that, on a densely forested island of mighty oaks, boats kept alive the networks that bound communities together.