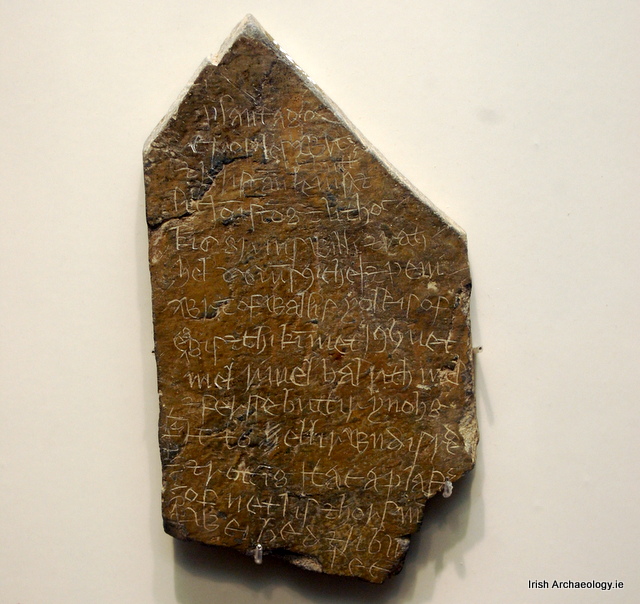 A late 15th century inscribed slate was discovered at Smarmore church, Co. Louth in 1959 and is now on display at the National Museum of Ireland. It contains a medicinal recipe, most likely for a poultice, that would have been applied to an ulcer or wound to aid healing. The recipe uses a variety of wild herbs (listed below) as well as wheat meal, pig’s lard and butter to help bind the poultice together. The text is written in Hiberno-English/Middle English and contains at least two words that appear to have Irish/Gaelic origins. A number of other inscribed slates were also found at Smarmore, one of which contained a cure for horse aliments, so it’s possible that this recipe was  intended for animal rather than human use.

An edited version of the original text reads roughly as follows:

Photos of a number of the plants used in the recipe are shown below, along with their medicinal properties according to various medieval texts. The majority of plants could be used to cure wounds and skin conditions, which would make sense if the Smarmore recipe was for a poultice.

Silverweed: A cure for ‘inward wounds, for wounds of the private parts’, ‘used to close up fresh wounds’ (Britton & Fletcher, 1990, 60)

Dead-nettle: A cure ‘for chilled wounds, for swellings, for putrefied wounds’ (Van Arsdall 2002, 137)

Common Plantain: A cure ‘for headache, for stomach pain, for wounds, for infected wounds, for mouth wounds and…’ (Van Arsdall 2002, 120)

Britton D. & Fletcher A. J. 1990 ‘Medieval Hiberno-English Inscriptions on the Inscribed Slates of Smarmore: Some Reconsiderations and Additions’ in Irish University Review Vol. 20, No. 1, The English of the Irish: Special Issue (Spring, 1990), pp. 55-72

9 thoughts on “A 15th century medicinal recipe from Co. Louth”