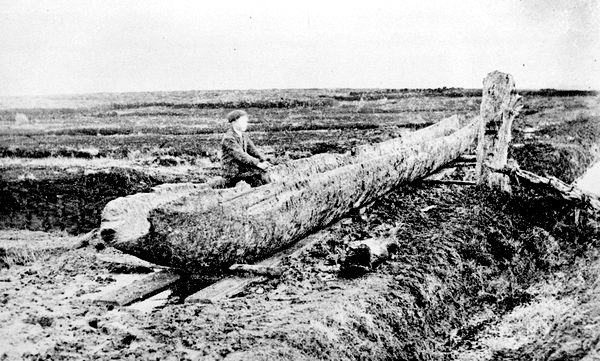 Over 4000 years old, the Lurgan canoe was discovered in 1901 by Patrick Coen as he worked in a Co. Galway bog that had once been a shallow lake. It is carved from a giant oak trunk and measures over 14 m (45ft) long by 1 m wide.  The boat is easily the largest artefact on display at the National Museum of Ireland, Kildare Street and its arrival there involved quite a journey.

It took nearly a month to transport the canoe from Lurgan bog to Milltown railway station, from whence it was brought to Tuam. Here it rested for four days where ‘nearly all in the town paid it a visit of inspection, the great majority taking away chips of it as souvenirs‘ (Tuam Herald, January 25, 1902). When finally it arrived in Dublin, the boat was pulled through the streets on specially-linked, horse-drawn carts and its eventual arrival at the front gates of the National Museum can be seen below.

Transforming a massive oak tree into this sleek canoe, using just stone axes and fire, must have taken our prehistoric ancestors considerable time and effort.  Inside the boat they left a series of raised ‘ribs’, which appear to separate the vessel into sections, as well as number of small holes, possibly to secure attachments. This has led some archaeologists to suggest that the boat may original have been joined to a second canoe to form a catamaran type-vessel or else that an outrigger of some kind was attached (Cribben et al 1999). This would have given the canoe much greater stability and allowed it to travel safely across large areas of open water or even the sea.

The Lurgan boat is not unique in an Irish context and recently two very similar Early Bronze Age canoes have been discovered in this part of north Connacht. They include a partial boat from Carrowneden in Co. Mayo and a complete vessel from Annaghkeen in Co. Galway. Fashioned out of oak, the Annagheen canoe measured 12m in length, while the Carrroneden vessel was once of similar size.

The original function of these very large canoes remains uncertain, although it seems unlikely that they were used purely for fishing. The scale of the logboats suggest that they were made for a specific purpose under the direction of skilled boat builders with experience in that craft (after Cribben et al 1999)

Similar vessels are known from certain parts of the world, for example in New Zealand, where they were used as war canoes. A ceremonial role for the boats is also a possibility and this could explain their exaggerated size. More mundane activities, such as trading, can not be ruled out either, especially if the canoes formed part of larger, composite boats, such as a catamarans or an out-rigger-canoes. Such vessels would have been capable of carrying heavy loads over long distances and their stability would have allowed them sail across open-water, and indeed the sea.

4 thoughts on “The Lurgan Canoe, an Early Bronze Age boat from Galway”