Saint Lachtin’s Arm is an important religious relic that was associated with Donoughmore church in Co. Cork. Dating from circa 1120 AD, it was made to encase a human bone, purportedly belonging to Saint Lachtin.  The shrine’s hereditary guardians were the Healy family and for much of the medieval period they were entrusted with its safekeeping.

Circa 400 mm tall, the shrine has a hollow core of yew wood, which originally contained an arm bone. The wooden core is ornamented with elaborate bronze panels that are decorated in zoomorphic interlace, highlighted with silver inlay.

The hand is cast in bronze and is also decorated in zoomorphic and foliate patterns. Unusually for hand shrines the fist is clenched, which emphasise the hand’s distinctive nails.

The shrine bears a number of inscriptions, one of which is dedicated to its patron. This text reads ‘A prayer for Maolseachnail O Callaghan, Ard Ri of the Ua Ealach Mumhain who made this shrine‘ (Maolseachnail died 1121 AD).

Similar arm reliquaries are known to have once existed at Lorrha in Co. Tipperary and at Clonmacnoise, in Co. Offaly (O Floinn 1994, p. 16). However, the only other one that still survives is the 15th century Shrine of St. Patrick’s Hand, which is now displayed at the Ulster Museum (see image to the left).

Relics such as Saint Lachtin’s arm played an important role in early Irish society, where they were often used in oath swearing ceremonies and also to perform ‘cures’. Such traditions appear to have persisted right down to the early modern period, for example, in the 17th century the Book of Durrow was used to cure cattle ailments.  Similarly in the 19th century, a court case in Co. Sligo had to be postponed until the shrine known as the Soiscéal Molaise was produced, as one party objected to swearing on the Bible (O Floinn 1994, p. 12).

Although no longer venerated, St. Lachtin’s Arm can be still be viewed today at the National Museum of Ireland, Kildare Street, Dublin. 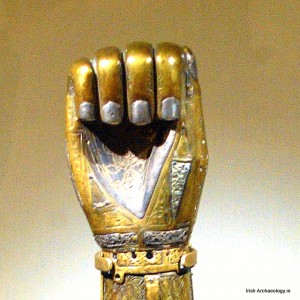