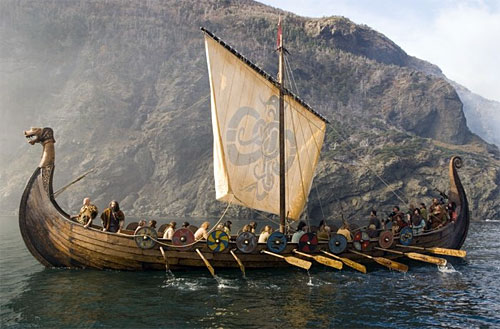 ‘Bitter is the wind tonight

It tosses the ocean’s white hair

Tonight I fear not the fierce warriors of Norway

Coursing on the Irish sea‘

(A translation by Kuno Meyer)

This anonymous poem is written in the margins of an Early Irish manuscript that now resides in the monastery of St. Gall in Switzerland. Most likely dating from around 850 AD, the text may have been complied in a northern Irish monastery such as Nendrum or Bangor (both in Co. Down).

In a just a few, short words it conveys the sense of dread that was permeating through Irish monastic communities in the 9th century AD. During this period Viking raids were an every present danger and the Irish Annal’s record numerous attacks on monasteries. In such a climate of fear and uncertainty, it is not difficult to understand why a monk would wish for stormy seas and a respite from ship borne assaults.

The original Irish text of the poem.

10 thoughts on “‘Tonight I fear not the Vikings’, An Early Irish Poem”