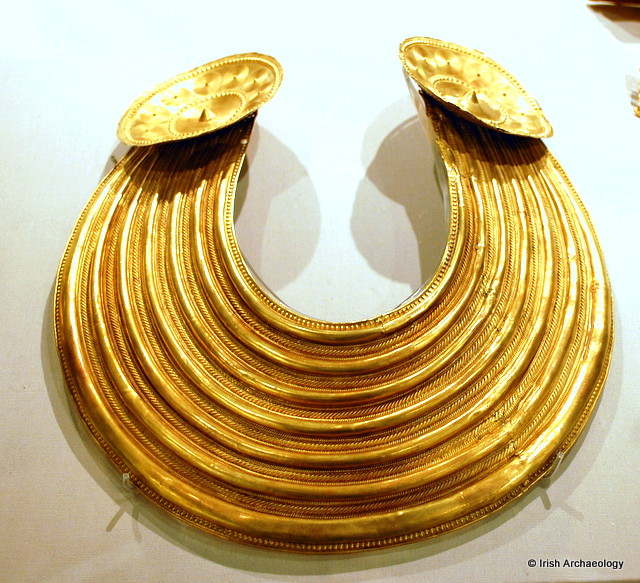 Nearly three thousand years old, the Gleninsheen collar represents one of the great treasures of the Irish Bronze Age. Fashioned out sheet gold and measuring 31 cm across, it is decorated in repoussé ornamentation that utilises beaded and circular motifs to stunning effect.

It was found in 1932 by a young man named Patrick Nolan, as he was hunting near Ballyvaughan in Co. Clare.  While walking through a field, his dog suddenly startled a rabbit, which took flight into one of the many limestone fissures that characterise The Burren. When Patrick inspected the narrow bolt-hole, something caught his eye. At the very bottom of the fissure and partially hidden by a large flat stone, was a spectacular gold object. Patrick had discovered the Gleninsheen Collar.

However, when he brought the artefact home, his uncle was less than enthused. The old man believed that the collar was part of an ancient coffin and fearing that it was unlucky, he forbade Patrick from bringing it into the house.  A little lost for what to do, Patrick decided to hide the gold collar under a bush for safekeeping.

It was to remain here for nearly two years until finally Patrick informed a local man, Dermot Gleeson, that he had found a ‘queer looking thing‘ and would Dermot like to see it. When he clasped eyes on the collar Mr. Gleeson immediately realised its importance and informed Dr. Adolph Mahr, Director of Antiquities at the National Museum of Ireland (the collar was subsequently brought to Dublin and officially recorded).

A uniquely Irish artefact, to date only 11 gold collars (or gorgets are they are sometimes known) have been found, mainly in the North Munster region. They appear to have been originally worn as large necklaces and evidence for attachment holes, to secure a cord or light chain have been identified on a number of them. Undoubtedly items of great prestige, the collars probably belonged to members of the local elite and when worn would have been a very conspicuous display of their wealth and power.

Today the Gleninsheen Collar can viewed at the National Museum of Ireland, Kildare Street, Dublin.

2 thoughts on “The Gleninsheen Gold Collar, a Bronze Age Treasure”