When the 14th century city officials of Waterford wanted to petition King Edward III to support their claim to the monopoly of having ships unload their wares at their town, rather than at a New Ross in county Wexford, they knew they had to dig to their deepest abilities of strategy and creativity. They produced an enormous charter roll of documents proving historical evidence of their purported rights to  Waterford harbour, and, unusually, provided their scroll with striking illustrations of key historical personalities. The result is the Great Charter Roll of Waterford, which still survives in a vibrant colourful condition and can be viewed at Waterford Museum of Treasures.

The characters depicted on the roll were well-known political figures of the day, and quite apart from the pleasing richness of the colours used in the illustrations, there is an enormity of fashion detail to be observed in their costumes. King Edward III, the very man to whom the petition was being addressed, himself figures prominently.

The charter roll’s designers had to make sure he was flattered accordingly.

And so they depicted him in tights.

Yes: the-then King of England is shown lolling back in his wooden throne, in a dark blue tunic with a gold knight’s belt, one leg idly crossed over the other; the Museum’s exhibit panel describes Edward III as sitting “awkwardly” on his wooden throne, but I challenge this: rather, I suggest that he sits proudly, all the better to show off his leg-hugging vibrant red tights, and, equally as striking, his outrageously long pointed shoes. 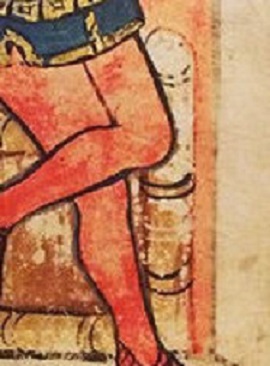 The idea of a man wearing tight leggings under a short tunic brings is already at large thanks to the spoof movie Robin Hood Men in Tights. The style is based on a real trend that did indeed have a heyday, right in the fourteenth century, to the extent that the king wore it.

Tight leggings, made of linen or wool, came about thanks to the enormously significant though simple development of the reinforced button hole, or the eyelet. Buttons had been worn on clothing throughout the centuries till now, but as decoration only. Now with reinforced holes through which the buttons could be used to fasten one part of a garment to another, clothing could be worn to fit to the wearer’s natural shapes and curves.

Clothing till now had been of simple, unstructured robes, whether for women or for men. Embellishment and personality was achieved through sewn-on gemstones, wearing of jewellery and elaborate hair-styling instead. Now with the ability to fit garments, through extensive buttoning, to the shape of the wearer’s waist, arms and the entire length of the leg, the human physical form was not now concealed behind long-flowing drapes but could now be revealed in clothed form. 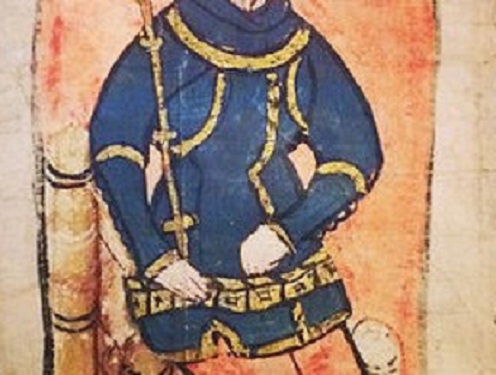 A long-lived simplicity in clothing was vanquished. Who knew that the simple button and its eyelet accomplice could have such significance? Pause to appreciate it the next time you button yourself into your attire for the day or the evening.

The visual impact of Edward III’s tights and shoes is certainly very striking, and though it obviously became totally acceptable for him to stride about in them, the style did indeed cause quite a stir. Now that buttons could be supported for functional purposes, they could be applied to garments in rows meaning they fit snugly to  the wearer’s physical outline.

Tight hose that revealed a man’s form scandalised older and more conservative sections of the population. The form of arms, legs, chests and even groin areas otherwise lost under modest full-flowing garments suddenly became defined to the extent that a French chronicler was led to write that

“Men, in particular, noblemen and their squires, and a few bourgeois and their servants, took to wearing tunics so short and tight that they revealed what modesty bids us hide”

If the tight pants caused consternation, consider the controversy that the persistent trend for wearing long-pointed shoes caused.  The Pope even tried to ban them entirely for their apparent suggestively phallic form.  They were known as poulaines, or crackows, possibly because the style originated in Poland. Towards the end of the fourteenth century, shoes became so elongated that French poet Eustache Deschamps criticised their wearers for walking sideways like crabs in them. 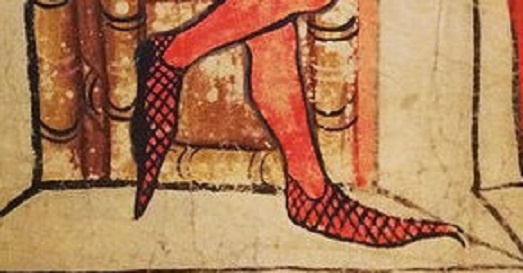 Isn’t fashion a funny thing? I can hear my mother tut-tutting at current trends of impractical high heel shoes and how uncomfortable they are for their wearers (picture the dance floor at a modern-day wedding, said offending shoes cast off after a long day of pain) – yet how prevailing it is to wear them.

Certainly, today’s high heel shoes fulfil a fashion statement role, they make the wearer look taller, if that is what is desirable, they give shape to the legs,  if that is what is desirable – but ultimately, they are uncomfortable to wear. 14th century long-pointed shoes were no different. They were not necessarily comfortable, but fulfil a fashion statement role, which in the 14th century was concerned with an elongated silhouette; the shoes continue  “the narrow, stretched look of the rest of the costume”.  The style originated as a male one, but was later taken up by women also.

Regardless of the controversy, Edward III fairly brandishes them in the illustration, and it is easy to understand why the Waterford Charter Roll illustrators depicted him this way: it was during his reign alone that three laws concerning fashion were passed, including one designed to control who ought wear elongated shoes:

“no knight under the estate of a lord, esquire or gentleman , nor any other person, shall wear any shoes or boots having spikes or points which exceed the length of two inches, under the forfeiture of forty pence.”

If you can’t get to Waterford museum in the near future, their website has an extremely useful virtual tour facility http://www.waterfordtreasures.com/medieval-museum

Laver, J. 1979 The Concise History of Costume and Fashion, Abrams

1 thought on “The Height of Fashion: King Edward III and the Waterford Charter Roll”