Early Medieval Ireland in Photos. A small selection of some of the brilliant images that have been entered into our Photography Competition, this time with an emphasis on Early Medieval sites. You can seen a selection of Prehistoric photos here. The competition runs until the 31st of July, so don’t be afraid to enter.  All of the images used in this blog post are copyright of the respective photographers, please respect this. 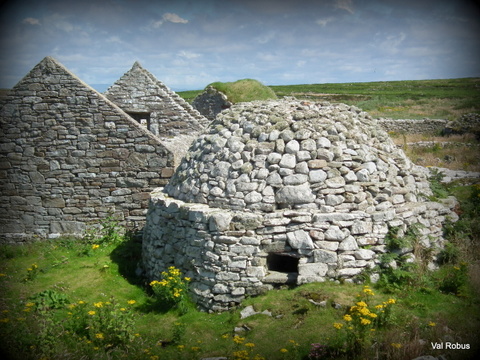 ‘One of the beehive cells on Inishmurray Island off the coast of Mullaghmore, Co. Sligo’. Photo by Val Robus 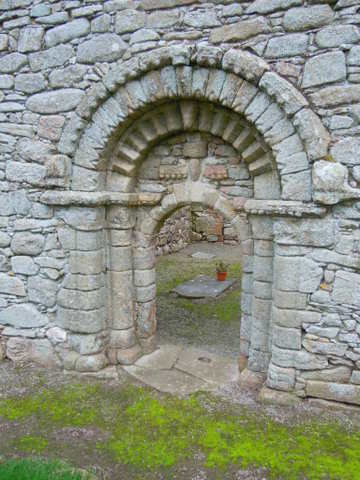 12th century Romanesque Church doorway, Ullard, Co. Kilkenny. Photo and text by Nicola Gray. ‘Close up of west doorway. The round arch of Ullard’s west doorway recedes in effect, allowed by the thick wall of the west gable and recessed carving of the doorway. The carving appears to be executed in granite, a stone widely used in the area, with softer stone interspersed in the tympanum allowing for easier carving. The arches are adorned by stylised carvings in various shapes and patterns akin to the Romanesque style, overall creating a decorative architectural feature in an otherwise ordinary stone gable.’ 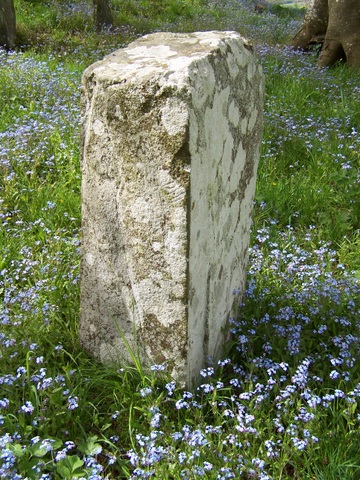 ‘An ogham stone in Killeen Cormac graveyard, Colbinstown, Co. Kildare. Some early historians have attempted to link this site with the missionary Palladius, who preceded Patrick. While the actual evidence for this is poor, there is no question the site was in existence at the very dawn of Irish Christianity. The inscription on this stone (one of seven recorded from the site) dates to the fifth century’. Photo and text by Sharon Greene 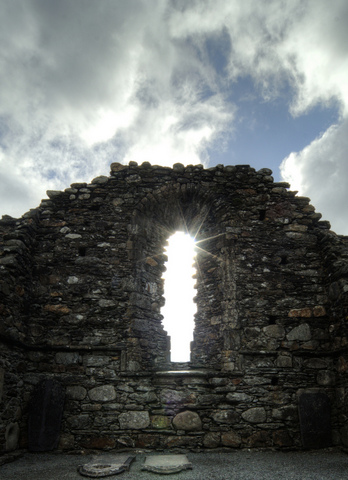 ‘Sunrise through the east window of the cathedral in Glendalough, Co. Wicklow. Photo by Rob Hurson

‘Approx 12km off the Kerry coast lies Skellig Michael. Monastic site established in the 6th century. Monks lived in beehive shaped structures which you can see either side of the monk’s graveyard in the centre of the image. The headstones are said to in their original positions. A truly spectacular setting and a ‘bucket list’ must.’ Photo and text by Elaine Farrell 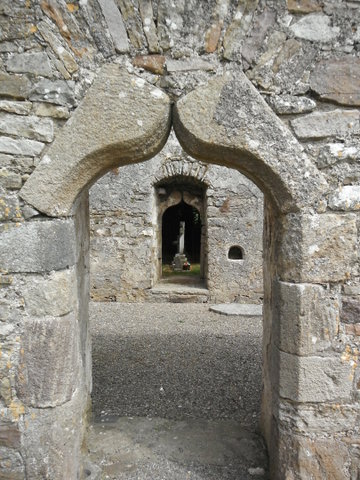 Kilfane Church, Thomastown, Co. Kilkenny. Photo and text by Andrea Doyle Mc Cabe. ‘This is also the site of a 13th-century church, now in ruins, has an adjoining castellated presbytery or stone house. There are traces of the original consecration crosses to be seen, the ogee headed doorways, remains of the altar, sedelia and book rest’. 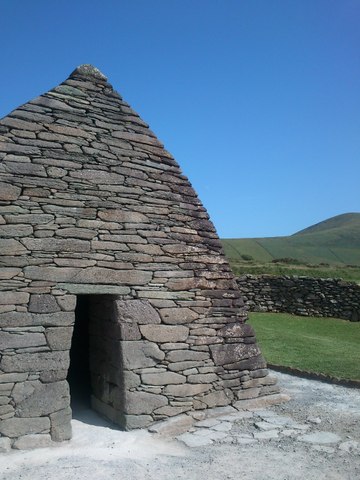 ‘Gallarus Oratory Co. Kerry. Not a cloud in the sky.’ Photo by Dwayne Jordan 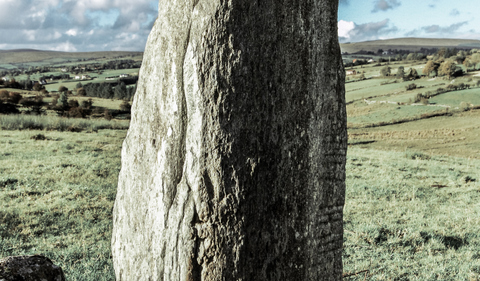 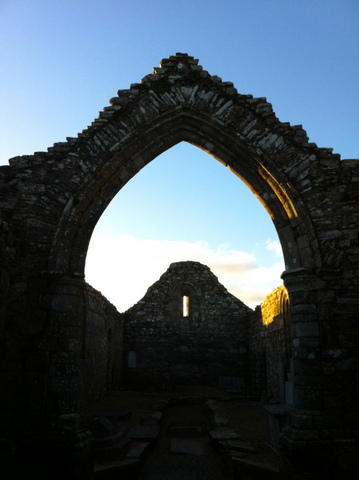 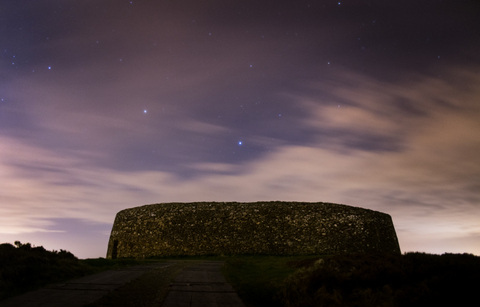 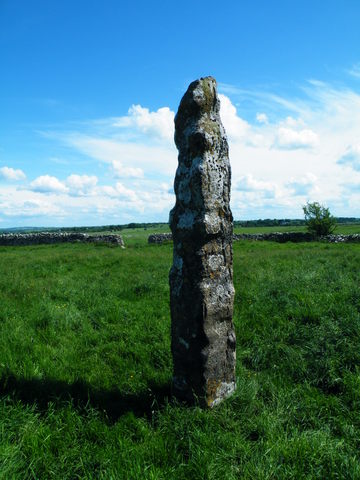 ‘Cloch Fhada na gCarn – The Long Stone of the Cairns, Carnfree Co. Roscommon. This imposing standing stone stands to the southeast of Carnfree, the inauguration place of the O’Connor Kings’. Photo and text by Gary Dempsey 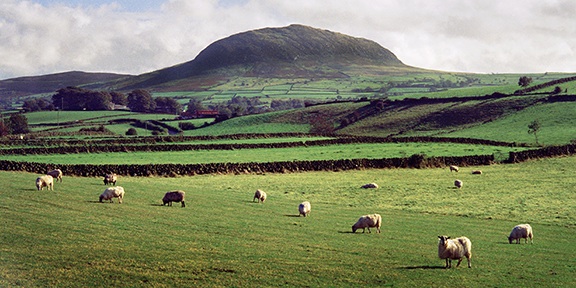 Slemish Mountain, Co. Antrim. Tradition holds that this mountain was where a youthful and ensalved Saint Patrick was brought to tend livestock. Photo by Mary Hartfelder 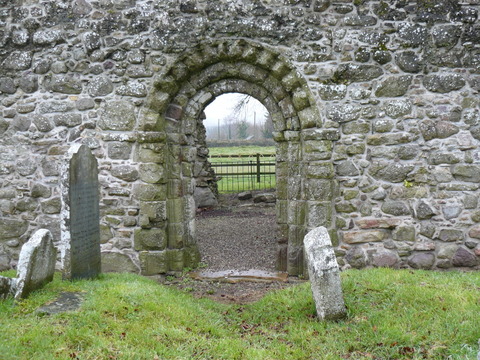 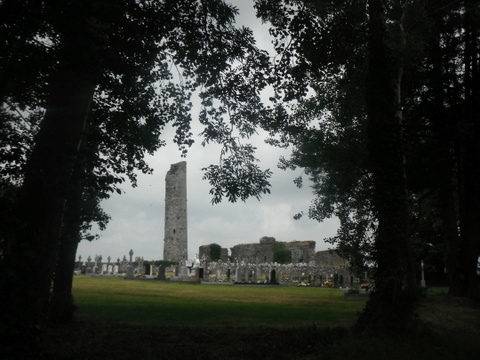 Tullaherin is a townland and parish in Thomastown, County Kilkenny. It is the site of a ninth-century round tower, an 11th-13th century ruined church and two ogham stones. Photo and text by Andrea Doyle Mc Cabe 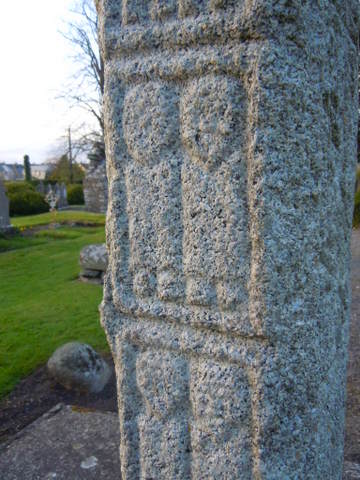 9th century High Cross, Castledermot, Co. Kildare. Photo and text by Nicola Gray. ‘Close-up of the south face of South Castledermot High Cross. This image depicts a carving of two figures with distinctive square bodies, ‘v-shaped’ heads and two circles for feet. They are accompanied by another five similar panels on the south face, suggesting that is it likely they are two of the twelve Apostles. The simple nature of the carving creates a wonderfully characteristic representation of the human form and is to be seen on neighbouring High Crosses such as the North Castledermot Cross and the Moone High Cross’. 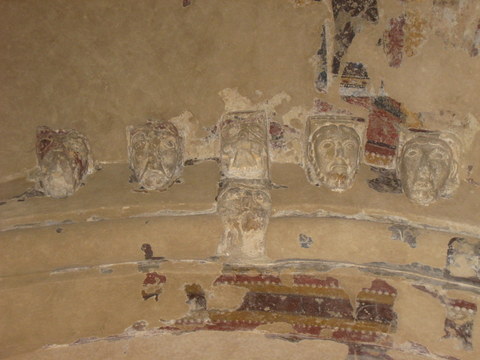 Carved heads and frescoe fragments on the Chancel Vault in Cormac’s Chapel (1134) at the Rock of Cashel, County Tipperary. Photo by Marion F. Kenny 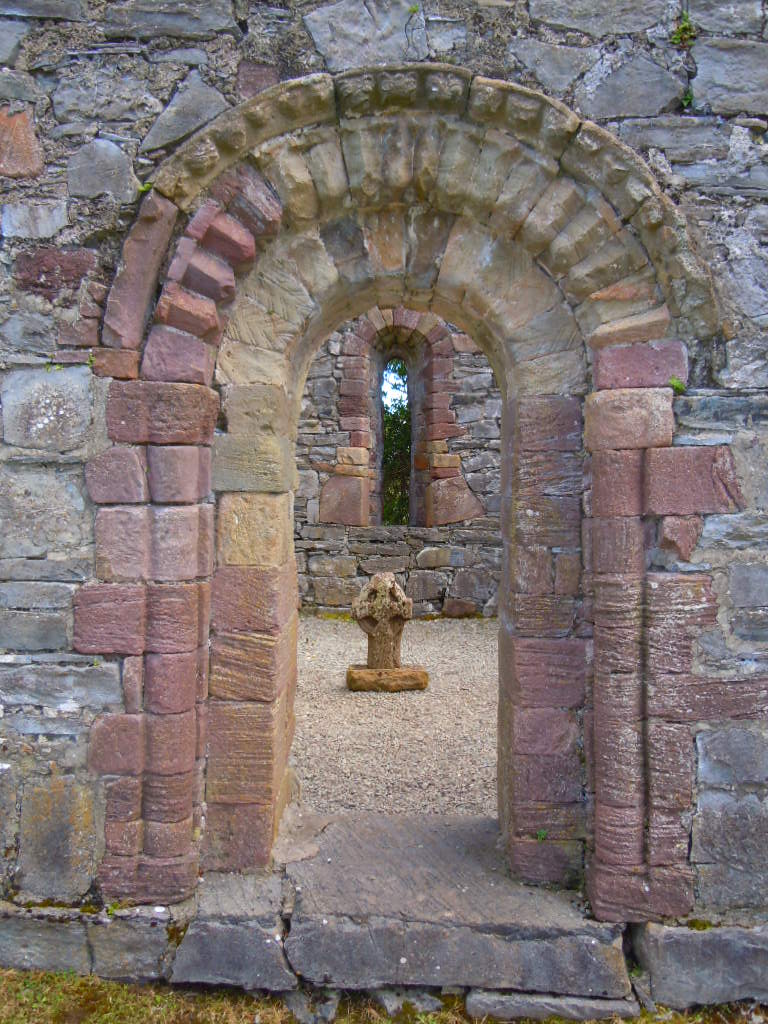 11th – 12th century Romanesque Church doorway, Innisfallen Island, Co. Kerry. Photo and text by Nicola Gray.  ‘The characteristic round arch of the portal and thick, sturdy stonework are distinctly Romanesque. The contrast of the doorway’s red/yellow stone and the usual grey of the entire west gable creates a definitive architectural feature, through material and execution of decorative carving. The carving of the arch follows a symmetry defined by three individual plains of figureheads, raised and shallow chevron patterns’. 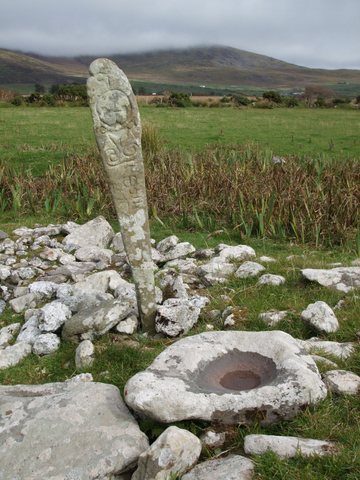 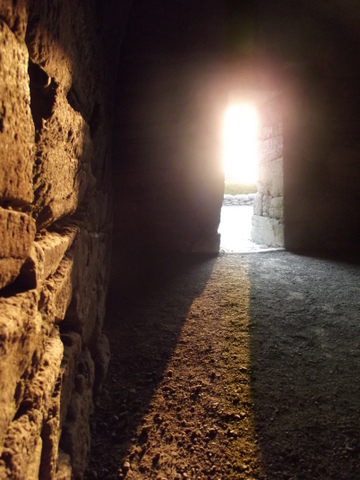 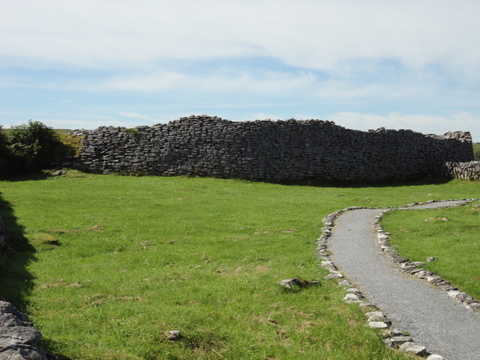 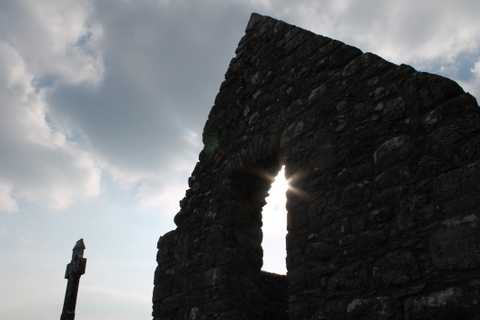 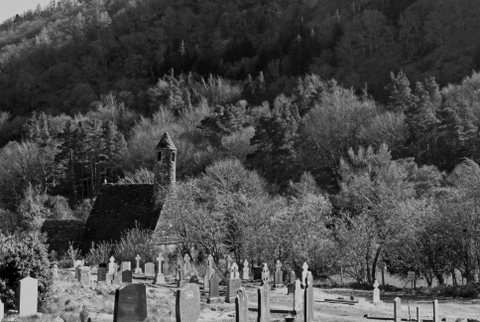 St. Kevins Kitchen, Glendalough, Co. Wicklow. Photo and text by Shan Gray. ‘St. Kevin’s Church better known as St. Kevin’s Kitchen is a nave-and-chancel church of the 12th century. It has a small Round Tower above the west doorway. The roof is entirely of stone, and is prevented from sagging in the centre by the wall of a small chamber above the nave of the church. The Round Tower, which acted as a belfry, was added to the church after the original construction. Only the foundations now remain of the chancel, and beside it still stands the stone-roofed sacristy’. 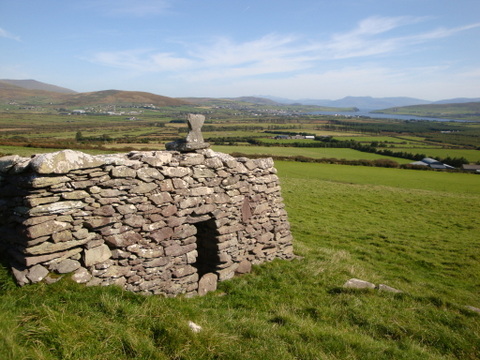 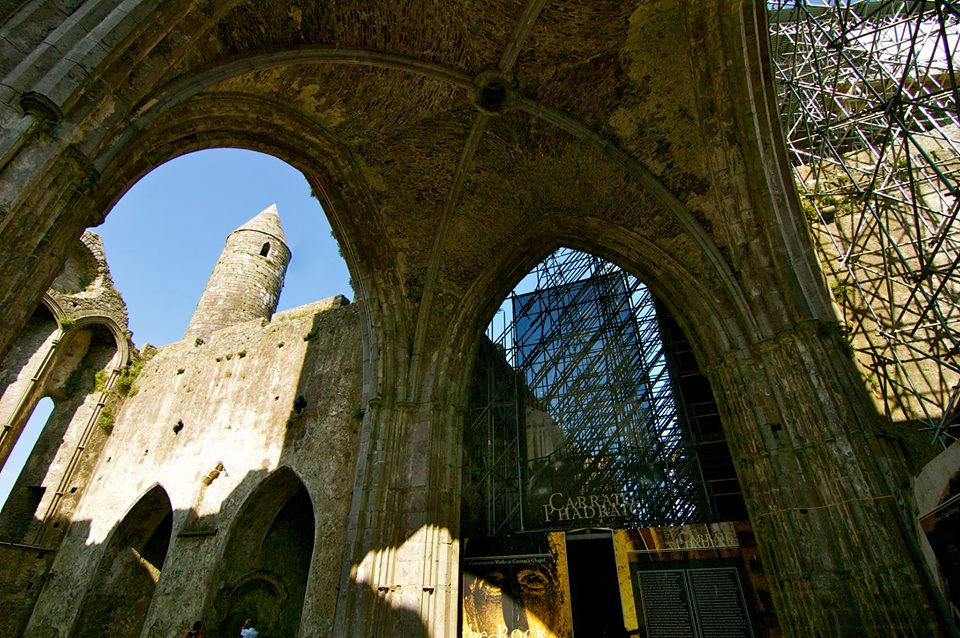 ‘Extensive restorative work taking place at The Rock of Cashel, Co Tipperary. The scaffolding makes a striking contrast with the structure which dates from c. 1100. It was traditionally the seat of the kings of Munster, prior to the Norman invasion. In 1101 the king donated his fortress to the church’. Photo and text by Elaine Farrell